http://trampslikeus.org/
enjoy!
Posted by WANDERLUST at 11:36 PM No comments:

"A Teardrop On The Face Of Eternity" 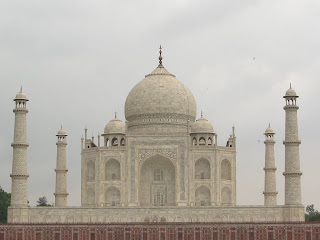 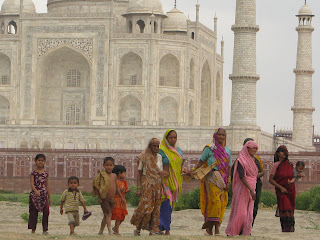 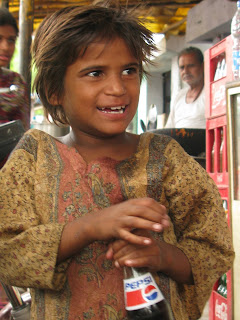 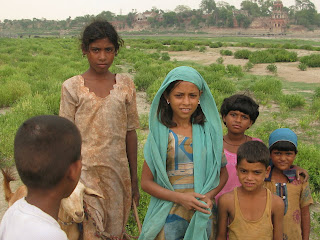 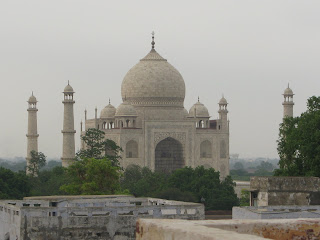 1.The Taj Mahal...unreal 2.Women and children returning from the bathing ghats of Yamuna River 3.An "Untouchable" wowed when i gave her a soda 4.Children of Agra 5.Backdrop for a stimulating conversation
-The Taj Mahal...wow...
well before we get started on how breathtakingly awesome the Taj is, lets take it back to Delhi.
I booked a ticket to Udaipur, Rajasthan, but due to conflict between the Rajasthani people and their government, my ticket was canceled for 4 days straight. Very frustrating, but my trivial desires pale in comparison to the needs of the Rajasthani people. Not quite sure of the situation in its entirety, but it was apparently dire enough for them to lay their bodies across the railroad tracks. None the less frustrated with it all, i decided to skip my 2nd trip through Rajasthan and opt for Uttar Pradesh, to a place called Agra. The home of the grandiose Taj Mahal. I made it to Agra around midnight. And after sat beside a criminal in custody, bound hand and foot, and tended by 6 or 7 local police, all armed with lock and load rifles a score and a half short of being considered muskets, for 5 hours, I'm happy to arrive! The guy was actually nice and continually offered me cigarettes. I don't think he understood "i don't smoke"...anyways...The elected guesthouse, apprised by my traveler's bible, Lonely Planet, put me 50 meters away from the west gate of the Taj. The view from the roof of this humble stay was implausible! I spent only one day in Agra, but it was rather fruitful. Waking just at sunrise, i treked out to the west gate of the Taj Mahal. My luck... closed on Fridays for cleaning. I walked around to the Yamuna River flowing out back to engage in some people watching and procure a great view of the Taj. Later, I met a darling Polish couple named "Sticky" and Peter. We shared travel stories over our rooftop breakfast. They were the only westerners i saw in Agra, and two of the most sincere and delightful individuals i've met on my trip thus far. After breakfast i hired an "auto" for a trip to the railway's reservation office and a little sightseeing. In general, the modest sights of Agra are awesome. I can't imagine spending an extended period of time here, but the time devoted was well spent. Reaching Mehtab Bagh(opposite side of the river) one can leave all modesty behind. The Taj has the ability to move one to tears. Built by Mughal Emperor Shah Jahan over the course of 22 years, it was reared as a memorial for his late wife, Mumtaz Mahal. Mumtaz died while giving birth to their 14th child. Subsequently, the Emperor was left in a state of utter devastation, and the product of this grief...one of the 7 wonders of the world. "A teardrop on the face of eternity"
Posted by WANDERLUST at 9:16 PM 3 comments: 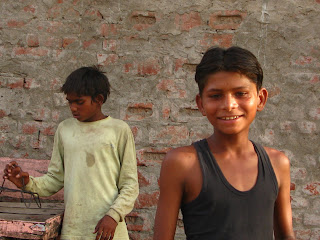 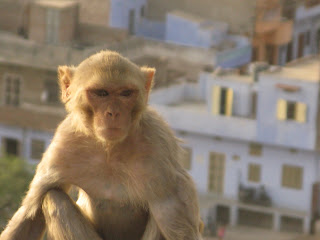 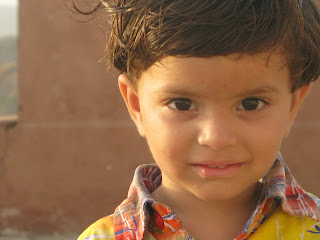 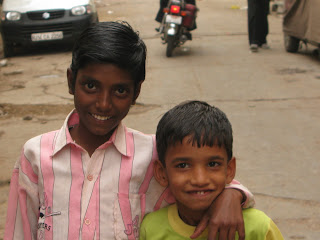 1.City Palace guard 2.kids hangin' in the Old City 3.resident of the Monkey Temple 4.Monkey Temple guard(i love this kid) 5.Old City best friends
-Many of you , have already seen a few of these pics, but i never took the time to post anything about my stay in Jaipur, sooo... Jaipur, Rajasthan, The Pink City(so named for the overkill of salmon color paint), located in the desserts of western India, is a dry, sandy place, filled to the brim with hungry jewelry shops. This congested metropolis is the capital of Rajasthan and the home to India's oldest movie house. Jaipur is also typically a peaceful place, but when 8 serial bomb blasts struck the heart of Jaipur's "Old City", on May 13th, leaving over 60 dead, and hundreds wounded, everyone was put on edge... I know i was.
Though the blast occurred less than a mile from my guest-house, i was not physically affected by the attack. One of the places attacked was the Hanuman Temple, where i payed a visit just the day before.
Despite this rare occurrence, Jaipur is still an interesting destination, with much to offer, as well as a lot of beautiful people, and strongly recommend for any India itinerary!
Posted by WANDERLUST at 3:19 PM 2 comments: 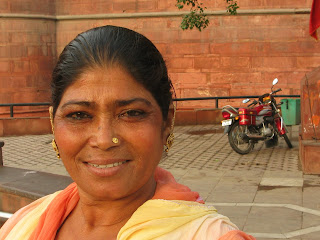 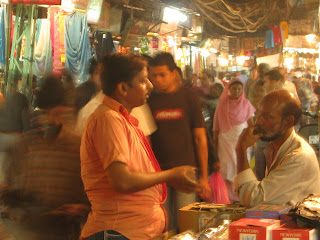 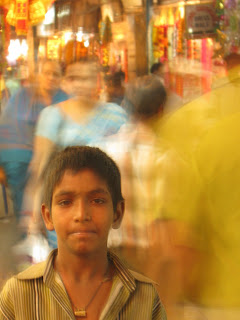 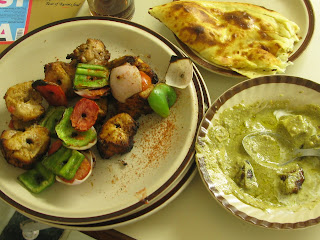 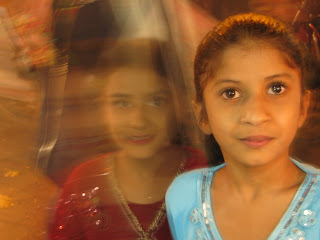 1.friendly face at the Red Fort 2.Old Delhi's busy bazzars 3.Ram Jam the guide 4.Karim's perfection 5.young girl in market place
-Today was quite a treat. Tired of lounging around for most of the day, waiting for the rain to subside, i decided to make a trip out to the chaos of Old Delhi. After arriving for about Rs. 80($2.40), i head to the decaying "Red Fort". Its pretty chill here, but i am asked by 10+ Indian family tourists to have my picture taken with them...i don't mind. After an hour of mediocre photography myself, i leave in route for the famed Karim's Arabic restaurant. Making my way...more like getting lost, in the labyrinth of alleys that make up Old Delhi's bizzars, I'm approached by young Ram Jam (who is unfamiliar with "Black Betty'...i asked) and agrees for 2 rupees, to show me the way. The markets were awesome! Weaving in and out of tight pathways, dodging people, rickshaws, and motorcycles, Ram Jam isn't easy to keep up with. Eventually he stops and points to a street on the right. I thank (pay) him, and right i go. Walking past the entrance several times, i finally make my way in. I'm immediately sat and handed a menu. Chicken Tikka with butter Naan(bread) are usually always good, so i go for 'em. I decide to be slightly adventurous and take the servers suggestion for Karim Veg...it's amazing! Actually everything is amazing. Definitely one of the best meals I've ever eaten in my entire life. I understand why it made Time Magazine's issue and list "The Best of Asia." And this, they apparently were not humble about, for its printed on the front of their menus. Opened in 1913, the current owner's lineage dates back to the same chefs that prepared dishes for Mughali Emperors centuries ago. Word around the campfire is that its the most authentic Mughali fare in all of India. The food was delivered almost as fast as it was ordered. The Tikka kebabs were perfect...you haven't had a kebab til you've had one of Karim's...sorry mom.
The butter Naan isn't the usual dry or greasy, flat and over cooked bread you find most places. It's fluffy, perfectly moist, and damn delicious! The Karim Veg was a creamy, saucy mixture of spices, cheese, and unknown veggies...also amazing! But, the real treat was real "ice cold" coke, that most of India just can't produce. After i struggled to down the generous portion of food, i made my way back to the packed bazzars for more pics, and fought my way to an auto-rickshaw, to make it back "home." Thanks for the suggestion Gary!
Posted by WANDERLUST at 9:33 AM 4 comments:

india has a bit of a stray problem... 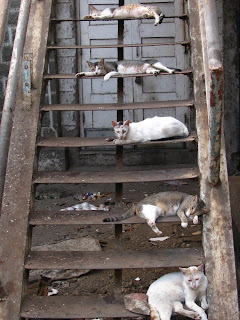 ...then again, you can't plan moments like this.
Posted by WANDERLUST at 2:36 AM 2 comments: 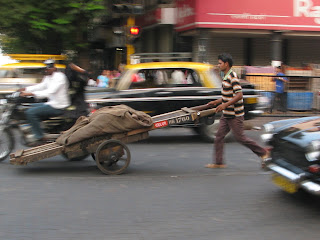 the last page of the novel 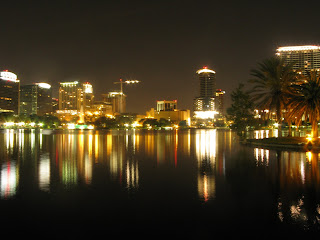 fare thee well Orlando...i love you all
Posted by WANDERLUST at 1:26 PM No comments: